OnePlus doesn’t have the best reputation for software updates, though a recent re-commitment seems to have things moving a little faster than before. Just over a month after the company (sort of) fixed HD playback issues on its 2019 flagships, it’s returned with yet another refresh. The OnePlus 7 and 7T series are both receiving updates today, though this one may rub some salt into the wounds of owners everywhere.

OxygenOS 11.0.3.31 is a relatively minor upgrade, especially when it comes to user-focused changes. Outside of some stability improvements for NFC, there aren’t any notable fixes included in this month’s update. The rest of the changelog focuses on adding features we’ve seen OnePlus bring to its other flagship devices, but that doesn’t mean they’re fan-favorites.

A new Bitmoji-themed ambient display mode is here, which syncs your customizable avatar with the clock and notifications. In a strange twist, the changelog mentions always-on display support, but since we know that feature never left beta testing for the OnePlus 7 lineup, that seems to be a mistake. The same goes for the new “screenshot AOD” ability, which should allow you to capture your phone’s ambient display — but again, that “AOD” label just isn’t correct. 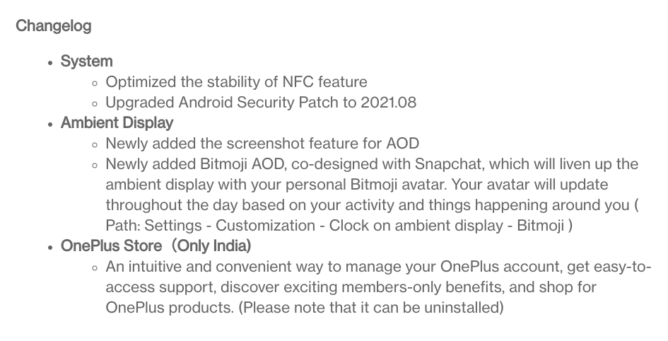 The (confusing) patch notes for the OnePlus 7.

The OnePlus Store app is bundled in this update, though its listing is also a bit confusing. For some reason, the OnePlus 7 series has the app marked as exclusive to India, while the 7T’s notes don’t feature that warning. We’ve seen the app appear on the company’s devices worldwide over the last few months, so it’s likely another mistake in the changelog. Either way, don’t worry — you can uninstall it. Finally, August’s security patch is included for good measure, a nice change of pace from the company’s usual two-month delay.

As usual, OnePlus is slowly pushing out these updates to a small group of users worldwide, with broader availability to follow in the coming days. If you want to check out the complete list of patch notes, head over to the forums for the OnePlus 7 and 7T, respectively.