Myriam Joire recently hosted prominent leaker Max Weinbach on her podcast and the two talked at length about Google’s next premium smartphones, the Pixel 6 and 6 Pro.

Weinbach corroborated rumors about the in-house Whitechapel chip for the Pixel 6 family. He believes that Google has opted for a proprietary chip to better leverage AI and machine learning. This is in line with a 2020 report that said Whitechapel would include hardware optimized for the Mountain View company’s machine-learning technology.
According to the information shared on the podcast, the chip will feature custom neural processing units (NPUs) and Image Signal Processor (ISP). Every Google phone from the Pixel 2 to the Pixel 4 featured an in-house machine learning processor to improve photography and other features but last year’s lineup came without an additional processor and relied solely on Qualcomm’s Snapdragon SoC.

While the use of AI-focused hardware sounds great for Pixel’s camera, which has always relied more on software than hardware, don’t expect a tremendous leap in device performance relative to current flagship processors.

The Whitechapel chip will allegedly be made by Samsung using the 5nm process and Weinbach says it will slot between the Qualcomm Snapdragon 888 and the Snapdragon 865. 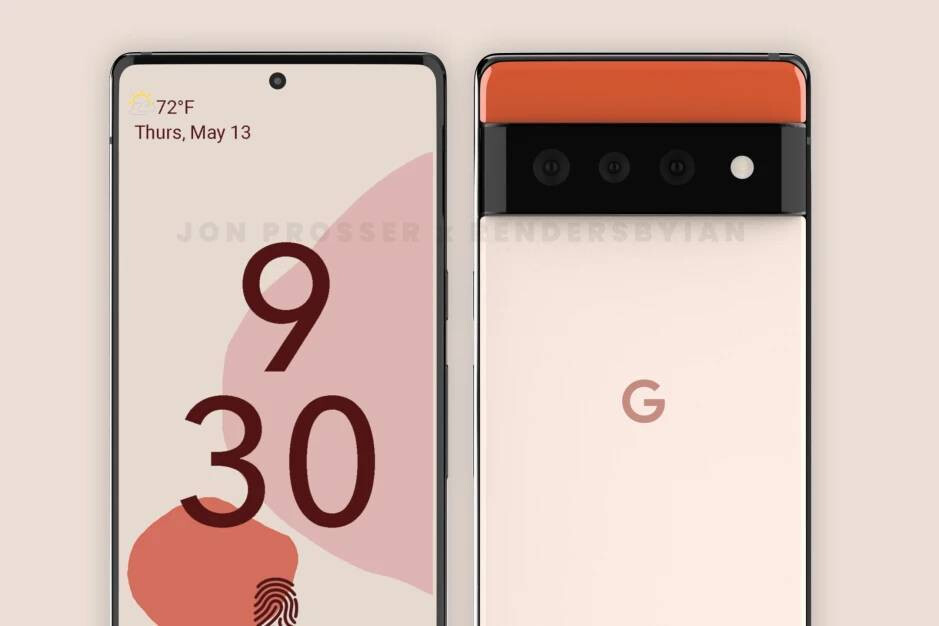 Google is also apparently finally going to use a new and bigger sensor for the main camera. Per an earlier leak, the device will have a primary 50MP sensor, an ultra-wide-angle unit, and an 8MP periscope telephoto lens with support for 5x optical zoom.

Onto other specs, the Pixel 6 Pro is expected to have a 120hz Quad HD screen, a 5,000mAh battery, an in-display fingerprint reader, and mmWave 5G. The Pixel 6 will likely come with a smaller Full HD display with the same refresh rate and a smaller battery.

To be more specific, the Pixel 6 Pro will feature a 6.7-inch curved AMOLED panel, and the standard model will have a 6.4-inches flat screen, if earlier reports are to be believed. The phones might also include ultra-wideband (UWB) technology.

Thanks to a flurry of leaked renders, we know that the Pixel 6 duo will have a three-tone design and a rectangular rear camera bump. The orange model seen in the leaks might not be so orange and white though. Instead, we will likely see a peach, sand (think Not Pink Pixel 3), and gold combo. In addition to that, a green model and a silver and black variant are also apparently on the cards.

If all goes well and Google doesn’t run into a chip shortage problem, we can expect to see the Pixel 6 and Pixel 6 Pro in October. Otherwise, the unveiling could get pushed to November.

The Pixel Watch will be launched alongside the new flagships. It will supposedly be underpinned by a 5nm Samsung chip, probably the one which is also expected to power the Galaxy Watch Active 4.

Google seems deeply invested in its new flagship lineup and is going to pull out all the stops. The company is allegedly going to market the new phones aggressively and it appears that it is eying Samsung’s market share. This contrasts sharply with its last year’s lackluster goals and the preparation suggests that the new devices will be amongst the best phones of 2021.
Weinbach also shared some tidbits about the Pixel 5a, which will likely be announced in August. The leaker says that it will probably cost more than the Pixel 4a, which would be a downer as leaks imply it will be a marginal improvement at best over its predecessor. Wireless charging will not be included.
Click this link to give the podcast a listen.