A team of researchers from MIT have have used computers and mathematical algorithms to turn the frequencies of a vibrating spiderweb into music. The researchers presented their results April 12, 2021, at the spring meeting of the American Chemical Society.

MIT’s Markus Buehler is the project’s principal investigator. He said in a statement:

The spider lives in an environment of vibrating strings. They don’t see very well, so they sense their world through vibrations, which have different frequencies.

Such vibrations happen, for example, when the spider stretches a silk strand during construction, or when the wind or a trapped fly moves the web. Spiders are sensitive to disturbances, which they detect with their legs.

Buehler, who has long been interested in music, wondered if he could extract rhythms and melodies from the vibrating strands of spiderwebs. With that goal in mind, the team scanned a natural spiderweb with a laser to capture 2D cross-sections, and then used computer algorithms to reconstruct the web’s 3D network. The team assigned different frequencies of sound to strands of the web, creating “notes” that they combined in patterns based on the web’s 3D structure to generate melodies. The researchers then created a harp-like instrument to play the spiderweb music. Buehler told Reuters:

Spiders are a whole different animal. What they see or sense isn’t actually audible or visible to the human eye or the human ear. And so by transposing it, we begin to experience that. 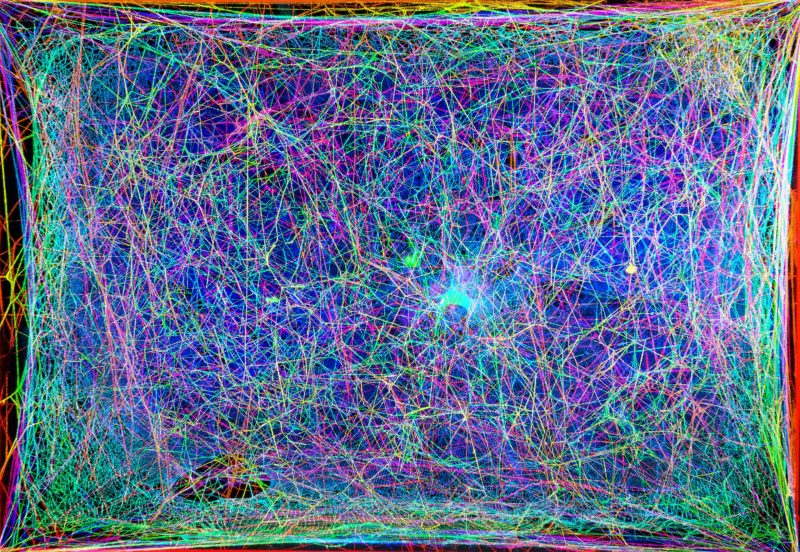 Cross-sectional images (shown in different colors) of a spiderweb were combined into this 3D image and translated into music. Image via Isabelle Su and Markus Buehler/ SciTechDaily.

The team is also interested in learning how to communicate with spiders in their own language. They recorded web vibrations produced when spiders performed different activities, such as building a web, communicating with other spiders or sending courtship signals. Although the frequencies sounded similar to the human ear, a machine learning algorithm correctly classified the sounds into the different activities. Buehler said:

Now we’re trying to generate synthetic signals to basically speak the language of the spider. If we expose them to certain patterns of rhythms or vibrations, can we affect what they do, and can we begin to communicate with them? Those are really exciting ideas.

Bottom line: Researchers have translated the complex structure of a spiderweb into music. Listen here.