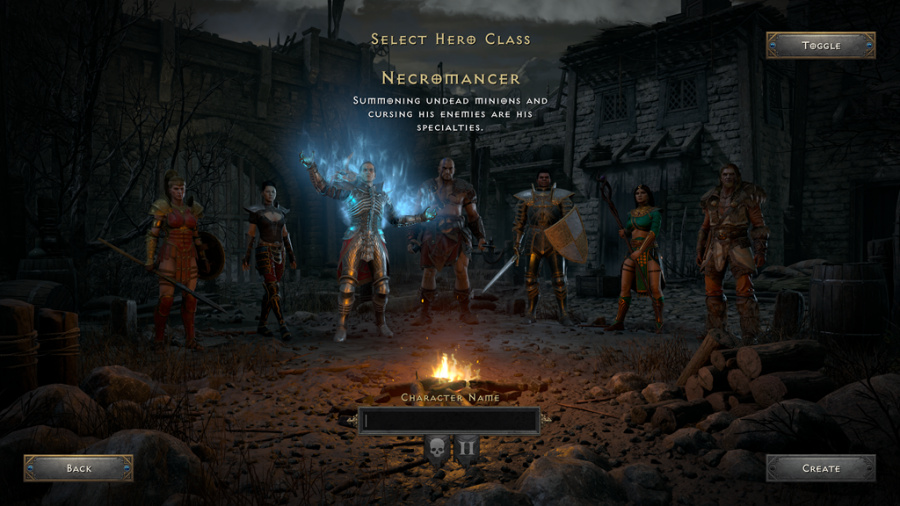 Now here’s its much-heralded and illustrious forebear, surprisingly titled Diablo 2 — resurrected and remastered, no less. And the clicks above have been replaced, of course, with taps. Or thumbs, or pushes, or presses, or whatever onomatopoeia you like to use for hitting buttons — since that’s the lion’s share of what you’ll be doing here. Approaching monsters, then hitting buttons. Hitting them so they fall down and grant you XP. Blasting them with magic. You already know; we’ve all trodden this territory before. Figuratively or quite literally, if you’ve played the original game on PC.

If indeed you are fortunate enough to have done this, you’ll be thoroughly at home with this Resurrected edition. After all, this is, quite simply, Diablo 2 as you remember it, warts and all. It has been spruced up in some ways, which we’ll get to, but at its core this is the same game you may well have been playing since 2000. That’s a good thing, if that’s what you want; an uncompromised and polished port of an action RPG classic. The real question, though, is whether or not Diablo 2 — as much as it’s a classic of the genre — is still worth playing in the year of our lord 2021. And it’s with that query that things begin to fog up a little. 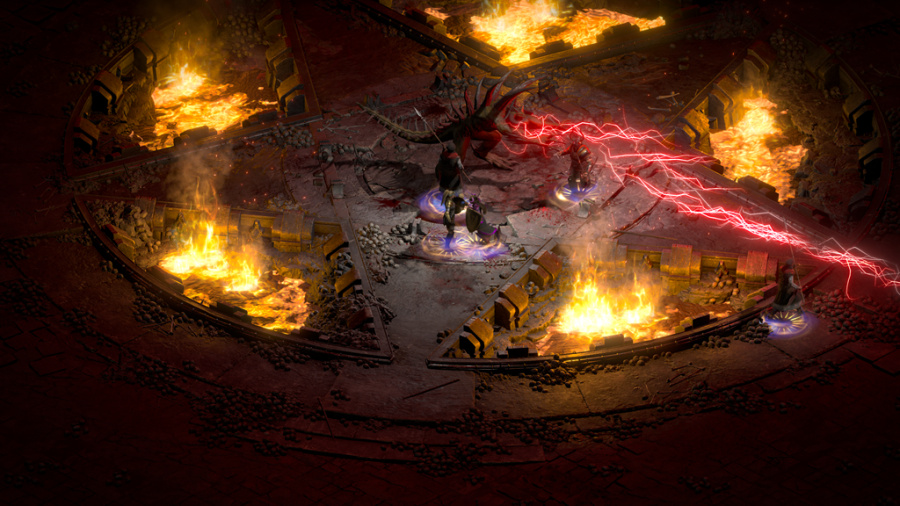 Control-wise, it’s pretty impressive. The interface has been transplanted to console beautifully and assigning skill points (and, indeed, the subsequent unlocked skills) is extremely simple and efficient. Movement around the maps is speedy, attacking is suitably responsive and nothing in the meat-and-potatoes mechanics gets in the player’s way, which is precisely what loot games need to be like; they’re effectively a conveyor belt of stuff and the last thing you want is some bizarre design choice throwing a spanner in the works. In this case, some sort of legendary +3 spanner, natch.

The inventory and how it’s handled is a bit of a mixed bag. Managing it is generally fine, though your allotted space feels a little miserly. It’s in the selling of your gradually outmoded wares that we ran into a frustration. On the one hand, routinely using your portals to return to town and offload the crap you’ve found creates a pleasingly numbing little loop of admittedly satisfying stash-cleansing, but on the opposing hand it’s pretty repetitive.

There are no Torchlight-esque pets to ferry your loot for you, it’s all manual. The ritual nature of this action suits the game to some extent, given that it’s pretty samey by design. There’s a real skinner box sort of feel to this genre — that’s not a bad thing. It’s compelling in its laboriousness. That seems like a backhanded sort of compliment — it isn’t. To appreciate the likes of Diablo 2, it’s important to note that to onlookers it isn’t much more complex then even the original Gauntlet. It’s in your specifications, your builds, your choices of character class, that it begins to stand out. Not to mention the multiplayer. 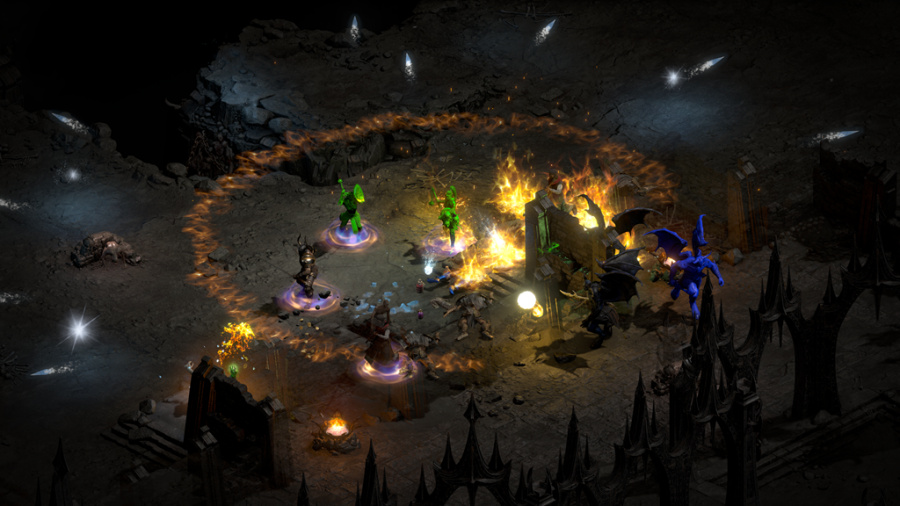 Said multiplayer is present and correct here, with Online and Offline characters completely isolated from one another. This is a bit of a shame as it means you can’t take that high-level Offline Necromancer online under any circumstances, but such is fairness, we suppose. Connection issues didn’t really trouble us outside of initial teething issues pre and post-launch. It was easy to get a game going with pals, and any lag or stuttering we encountered was very much minimal. Indeed, this is a fine way to play Diablo 2 – certain classes complement one another very nicely – but we think its atmosphere is best served as a lone hero fighting overwhelming hordes of darkness.

Visually, it’s a bit brilliant. You’re given the option of a performance mode and we strongly suggest you enable it, as the locked 60 frames per second makes up for any miniscule graphical shortcomings. We played in this mode throughout and the game looked great; it appears as though everything has been done that we could possibly ask for. Spells look spectacular, environments are robustly atmospheric and the monsters, most crucially, look suitably nasty. Some will gripe that there is a minor loss of personality in some of the choices – Diablo is a campy game, and the loss of certain more vivid colour tints and some modified monster poses do reduce that aspect of the experience a little. That, though, is the definition of nit-picking, as Vicarious Visions have done a sterling job recreating a classic here. 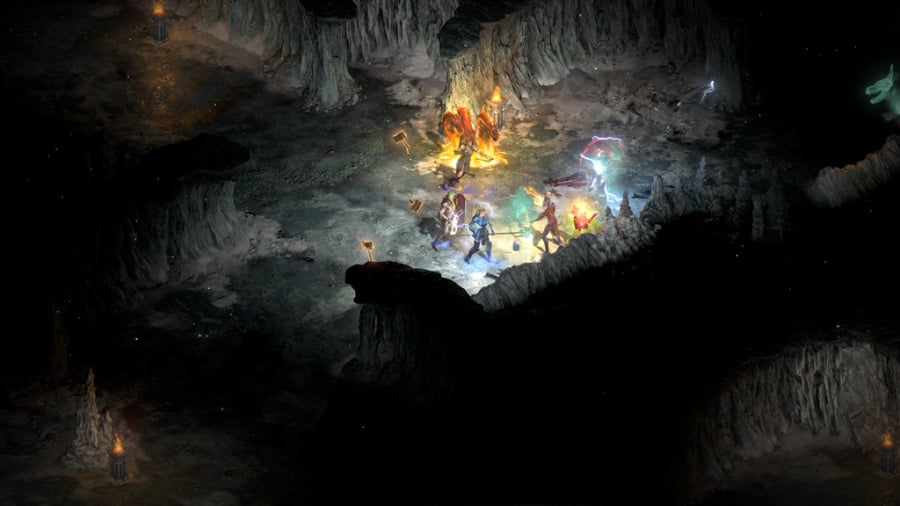 The music is as wonderful as ever, ditto the monster’s various “aargh!”s as they are dispatched, but the storyline is a bit bobbins. That might be heresy, but we couldn’t get invested in it, as well-voice-acted as it is. You can skip through the text quite efficiently, and this game is entirely about the gameplay loop so we opted mostly to just get on with it. That’s no knock on the hard work that’s been put into this — every single cutscene has been remade and they look tremendous. We’re just here for the loot.

So it’s a very, very good remaster (remake? It’s unclear when this much has been done over), then, of a rather old loot game that has had many subsequent iterations from other developers. Is it worth going back to Diablo 2, ultimately, when games that we’d argue are somewhat superior — Titan Quest, the sadly PC-only Grim Dawn… even (controversially, yes) its own sequel in Diablo 3: Ultimate Evil Edition, which packs in brilliant local co-op that Diablo 2 entirely (and understandably, given its framework) lacks. As good as Diablo 2 is, it’s an unfortunate fact that on console we’d rather play its follow-up, which felt more tailored to the joypad experience. Diablo 2 is a PC game that has been (brilliantly!) transferred to PS5, but it’s still a little held back by its origins.